My Cat Is An Alien Interview with DIVORCE 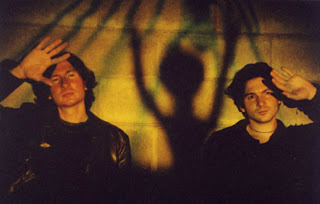 The process started almost two years ago when Italy's My Cat Is An Alien got in touch about trading records. Somehow the idea came up that DIVORCE do an LP for them. At the time, I was in quite deep with commitments to put out records, so this MCIAA project seemed like a far off possibility. Regardless, they sent the master. I was floored. I played it constantly for a year, hoping they wouldn't lose faith in my promise to get the album done. Needless to say, it finally happened. During this long journey to vinyl, I became even more enamored with the music of these strange brothers. They take what they do seriously and have created one of the most impressive catalogues of any artist or group in experimental music. To coincide with the release of Living on the Invisible Line, they did an interview with me regarding the new record and making music in the outer realms.

Like most of your recent albums, Living on the Invisible Line was recorded in a remote region of the Western Alps. One of the first things that struck me about the record was how much I could hear that vastness, isolation, and beauty reflected in the music. But MCIAA started making music in Torino, a city that you talk about as rapidly decaying (in one way or another). How has your music and outlook on creating changed since the studio moved to the mountains?

Of course moving our recording studio to a remote and isolated zone of the Western Alps, so far from Torino's environment, was definitely a big change. Our so-called "Alien Zone" studio is now located in a place which, from the very beginning, we decided to keep as totally private and secret even to close friends, in order to own a space where to be completely alone and detached from the "outside world". It did not only affected us from the artistic point of view, but maybe even more it opened our personal approach to life in terms of new perspectives. The mountain landscape was not new to us, since we spent many periods of our childhood there, but when we began to feel our hometown Torino as a place getting energetically "empty", due to the quick and inexorable destruction of the early 1900s abandoned factories that represented an immeasurable source of inspiration for us, we felt the need to find a place we could feel at ease again. It might sound strange, but as Torino seemed to become a more "comfortable" place to live in, instead we as artists started feeling ourselves lost in a meaningless and soulless void.
Actually, we must say that our creative process does not depend merely from the outside. In fact it basically comes from the innermost part of ourselves, although the vastness of the mountains helped developing our musical and visual aesthetics into further and still unexplored territories. We always felt that our music, and the process of creating instantaneous musical compositions itself, was connected to the Cosmos and the energies that inhabit space; mountains are sort of bridges running towards the highest dimensions of the Spheres, yet coming from the innermost core of our planet. Exactly the same kind of elements that act in our creative process.

In a recent Wire article you refer to the soulful utterances of Blind Willy Johnson on Dark Was The Night, Cold Was the Ground as an influence on your wordless vocal technique. In my opinion, American blues of that era is some of the most emotionally powerful music ever recorded. Experimental music sometimes fails because it lacks any trace of this kind of soul. Your work, however, has always seemed emotionally charged. Why is that important and how does it happen?

First, thanks for recognizing such emotional charge in our works; we know sometimes people don't get this immediately in our music for the reason of its undeniable "ultra-experimental" nature, and because of the fact that for most of people "experimental" is synonimous of "soulful", a kind of music that MUST have a "scientific-only" approach. On the contrary we totally agree with your point of view: music, be it jazz, blues, classical, punk, noise, ambient or experimental, MUST be "emotional", 'cause music itself is the highest expression of human soul. This is what we look for in all artistic expressions or works of art: pure feeling! Early blues was the purest expression of human existence on Earth, a human chant to the Spheres. This is why we also consider American primitive blues as one of the most soulful and powerful music and art of all times; it is as inspired and heartfelt as the primitive howl of the first man crying at the sky at the beginning of mankind. We feel strictly connected with all forms of archaic and primitive art, 'cause we see in them the strongest relationship with post-modern art. As Roberto once wrote, "all archaic art deals with death, sex, transcendence and Eternity. Anyone who does not look from this perspective cannot understand and appreciate contemporary art, even less pretend to use the term 'avant-garde' without exposing oneself to ridicule".

When it works well, improvisation can bring about some of the most ecstatic results in music. Certain late 60's / early 70's jazz records (Alice Coltrane - Journey into Satchidananda, Pharoah Sanders - Karma, etc) are obvious examples of this approach reaching sublime heights. Of course, the process of spontaneously creating music is as much a learned skill as any other musical technique, but there also seems to be an intangible element at work, almost like something magical manifests itself during these heavy moments. As improvisers, how do you conjure up that magic?

Well, you're naming some of our favourite jazz records and musicians. Most of their records are pure "magic" indeed, and since the beginning we realized that something special would occur any time we did improvise together: it's hard to explain it through words, because it's the combination of many irrational elements that reign over the whole musical creative process. It is like a subtle yet intense force that seems to guide you and the sounds you're playing into a dimension which is "other", in between this world and a place where a stronger energy makes all have a higher meaning and aim.

Being improvisers means to deal constantly with this forces and what is completely unknown, be it outside or inside of yourself: that's the spirit behind our music and art; we are somehow sure that when music will be on something magic will happen and will enlighten new acknowledgments of our souls and of the mysterious universe we are in.

Unlike language, music is neither arbitrary nor a creation of human beings: it preceeded the human world, and could continue to exist without humans.

I have become a huge fan during the process of putting together this LP. Thanks so much. Do you have any additional comments to add with regards to Living on the Invisible Line?

First, we must thank you for the utmost care and devotion you have put in releasing this LP, which we definitely feel as one of MCIAA's most intense works so far. In few words, this is the story of 'Living on the Invisible Line': in early April 2010 we were in our Alien Zone studio in Western Alps, when a huge snowfall took us unexpectedly. Quickly our studio was surrounded by two meters of snow, and we found ourselves even more isolated than usual... the atmosphere was surreal... like being projected into a mesmerizing white painting of abstract expressionism. At that point, it came spontaneous to think of our own lives, as artists struggling everyday against the violent affection of the outside world, trying to remain pure and find a salvation through our own art, as our only defense and only aim. As the one you can see in the back cover picture of this LP, the only thing we could see from our window was a long stalactite of ice... It was like a transparent line where we could see ourselves reflected in, an "invisible line" indeed, and we compared this with the tough way we are going along day by day. We switched the recorder on.

ORDER THE VINYL FROM DIVORCE http://divorcerecords.ca/mainpages/store.htm
Posted by drc at 12:32 PM